You’re never too young to start saving – especially for your retirement. Whenever it is that you decide to start, understand this: The longer you wait, the more it will cost. The cost will come in the form of either a smaller retirement income or larger savings requirements later in life. The graph shows the difference between Mary and Alan. Mary started investing at age 25, but Alan waited until he was 35.

Mary’s parents taught her the value of saving when she was young. Mary figured she might be able to retire early if she didn’t put it off. Alan is more of a free-spirit. He believes that things always have a way of “working out.” He is in no hurry to start investing and waits 10 years to start. They both opened a Roth IRA and invested $2,000 every year.

Forty years later, when they are about ready to retire, their investments both grew at an average rate of 8%. Mary invested $80,000 that has grown to almost $560,000. Alan has invested $60,000 and his account is worth about $245,000. Because she started earlier, Mary was able to invest more, and the investments had an extra decade to grow. She earned more than twice what Alan earned.

In this hypothetical example, Alan and Mary each invest $2,000 annually, earning 8% per year. Mary starts investing at age 25, and Alan waits to start at age 35. The additional 10 years of investing would have earned Mary over $300,000 more than Alan.

Start saving as early as possible, even if it is in small steps. Putting it off could cost you more than you’re willing to pay later in life.

Your financial advisor can help you set out a plan for preparing for your financial independence. If your employer offers a retirement plan like a 401(k) or 403(b) plan, take steps to learn about your investment options, and start investing as soon as possible.

If you don’t have access to an employer plan, ask your advisor about setting up a Roth or traditional IRA.

Being too conservative can be just as costly as being too aggressive when it is done at the wrong time. Be sure to position your investments in synch with your needs.

The graph below shows how much more could be earned at an 8% return over 30 years compared to a more conservative 5%. When building wealth for retirement, this is an important consideration. A more aggressive strategy may be prudent when you need growth and have many years to invest. These investments typically have more downside risk. It helps to be patient and give yourself time to be able to recover from market downturns.

Each situation involved the annual investment of $2,000 for forty years. One earned 5% annually. The other earned 8%. These examples are for illustrative purposes only, and do not represent any specific investment products.

Building a portfolio that provides for growth and income distributions at the same time can make managing retirement assets that much more challenging. The chart below shows how much harder your investments must work to recover as they fall harder. For this reason, it is important to start to focus on protecting your income-producing assets before you retire.

Conservative investments have lower downside risk and less potential for growth. These may be better suited for protecting the portion of your investments that you plan to use for making distributions. As the time for taking income approaches, talk with your financial advisor about using a segmentation approach. You’ll put some of your assets more conservatively so that they do a better job at protecting the money you plan to be spending soon.

Average Returns Don’t Matter Nearly as Much as the Timing.

It is easy to find stories about how the stock market earns a good average return over the long run. But if you need your money when the market is down, the average return is of little help. What you need instead is a plan that addresses your need for growth, income, and safety – all at the same time.

Imagine if you retired in 1990. The next 10 years experienced one of the best stock markets ever. If you invested in the stock market, you may have retired quite comfortably.

Imagine, on the other hand that you retired in 2000. You were looking forward to a wonderful retirement. The past decade had one of the best stock markets ever. But then the tech bubble burst and the market collapsed. By the time the market recovered, and you were feeling confident again, the Great Recession of 2008 dealt another crushing blow that took another 5 years to recover. If you followed a buy-and-hold strategy, your IRA was probably devastated.

This illustration shows the ups and downs of the value of a hypothetical $10,000 investment in the S&P 500 as it earned an average return of 4.45% annually from 2000 to 2016. With two bear markets in less than a decade, this shows why strategies that offer downside protection may be helpful.

This type of stock market performance is more common than most people realize. It is for that reason that an investment plan should not only acknowledge the existence of these periods. An effective plan should be designed to be able to manage through them. Your plan should be able to take advantage of the up cycles, and protect during the down cycles.

We spend our entire working careers focusing on growing the assets that we will use for generating income in retirement. We are bombarded with messages about managing volatility risk. By the time we retire, we have been so thoroughly conditioned to think of our assets from the growth standpoint that it can be hard to successfully shift to a strategy that distributes income while continuing to grow.

If you are taking income from your retirement assets, or plan to start taking income in the next few years, consider how important it may be to have a distribution strategy that protects your income with part of your investments, while the rest focuses on growth.

It may not be enough to have a “diversified” portfolio of stocks and bonds mixed together to give you a “growth and income” allocation. If the bonds are mixed in the same fund as the stocks as in a “balanced” mutual fund, the bonds cannot be isolated to help provide liquidity. Instead, you may want to consider a strategy that groups your assets based on their intended use. 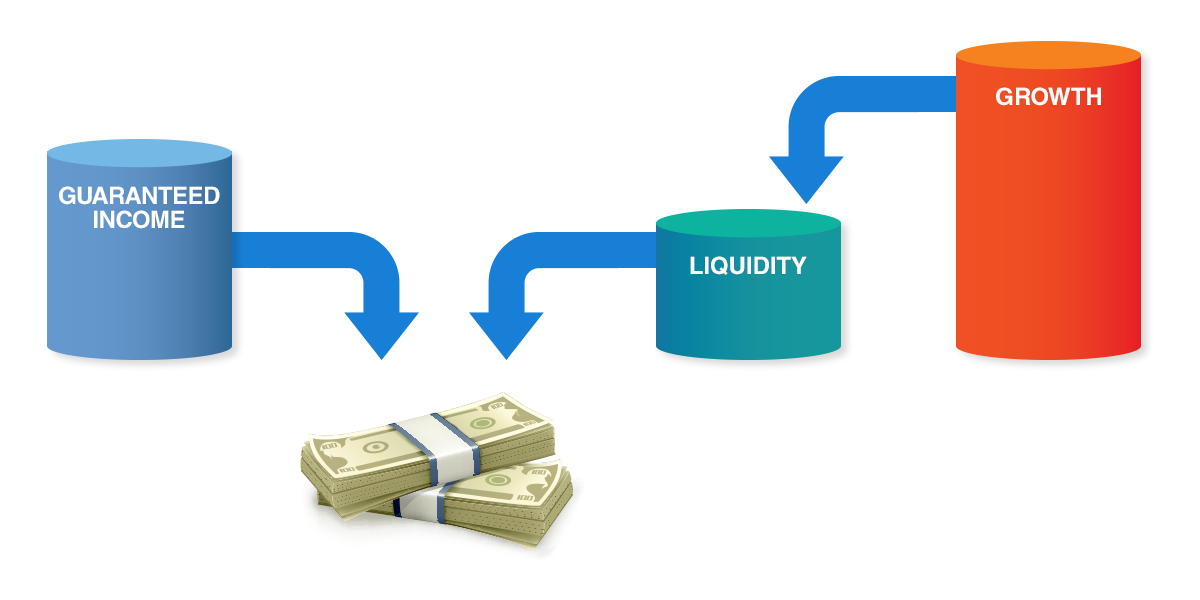 While there are many ways to implement this concept, in its simplest form, the strategy relies on segmenting your assets.

One segment is dedicated to strategies that provide guaranteed income. This includes Social Security, pensions, and annuities.

Another segment focuses on safety. The assets in this segment are invested conservatively because they are likely to be used for income relatively soon. We don’t want to take much risk with these.

A growth segment focuses on providing the funds needed for liquidity in years that are farther away. These are invested in a diversified mix of assets with higher growth potential. As this segment grows in value, part of it can be shifted to the liquidity segment to replenish the money that was withdrawn to meet spending needs.

Each of these segments has its unique risks. Steps should be taken to understand the risks, and manage your exposure to them. Planning is what makes a strategy like this possible. It is important to monitor the performance of the investments in the different segments, and to have a sound understanding of your current and future spending needs.